The Eco-Trust Guyana environmental club was resuscitated in 2005 by an executive body consisting of Michelle Chow-President, Joanne Ford-Vice President, George Watkins-Public Relations Officer and Joel Chase-Secretary/Treasurer. Since then it has been involved in a number of activities (both as host and participant) and workshops over the past 10 years. 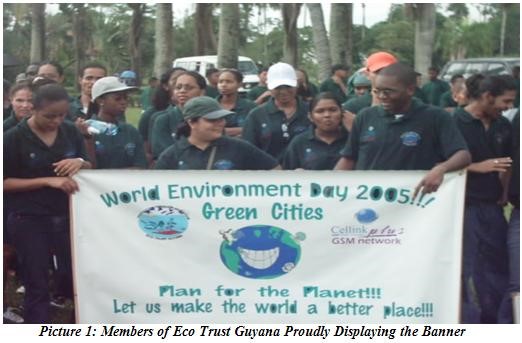 A number of members also attended the World Environment Week Lunch-time Seminar Series on June 6 to 10, 2005 also hosted by the EPA. Two other members-Shawn-Ann Greene and George Watkins, were chosen to attend the 2nd National Capacity Building Workshop for Environmental Clubs held on the 5th – 7th July, 2005, coordinated by the EPA, UNICEF, PAHO\WHO and the UNDP.
In November 2005, the club displayed posters on the Effects of Flooding and Industrial Pollution (done by the Fourth Year Students) at an Environmental Concert hosted by the University of Guyana School of Earth and Environmental Sciences at the George Walcott Lecture Theatre, Turkeyen Campus. 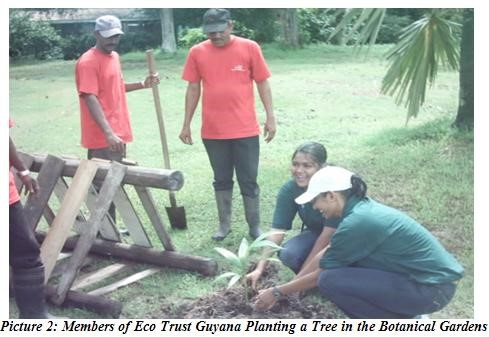 During the year 2006 EcoTrust continued with the hosting of a range of activities with a membership of approximately 67 active students including the executive committee members. For UG Career Day, held during March 2006, Eco-Trust Guyana presented a poster describing Eco-Trust Guyana and its objectives, roles and activities.
On March 23, 2006, three members of Eco-Trust Guyana-Amelia Harrichandra, Bibi Khan and Joel Chase- hosted talks at the St Andrews Primary School, Georgetown and St. Andrews Primary School, Coven John for World Water Day 2006 where the importance of water and the methods of sampling were explained to the recently established environmental clubs at the aforementioned schools.

Additionally, the Club (George Watkins and Joanne Ford) was involved in capacity building exercises, inclusive of the IADB-CPDC Workshop in Techniques for Successful Proposal Writing and Resource Mobilisation, held in January in Guyana and April 2006 in Barbados The Vice-President of Eco-Trust also represented Eco-Trust at the International Youth Conference for Self-Self Cooperation held in St Lucia during the month of May. This conference was hosted by the Caribbean Youth Environmental Network (CYEN), Caribbean Regional Environmental Programme (CREP), the United Nations International Student Movement (ISMUN) and the International Fund for Animal Welfare.

The Club promoted several activities aimed at raising environmental consciousness among its members and youths on campus. One such activity was the beautification of the environs around the School of Earth & Environmental Sciences and the Faculty of Natural Sciences through the planting of a number of exotic tree species. This activity was done to commemorate World Environment Day. 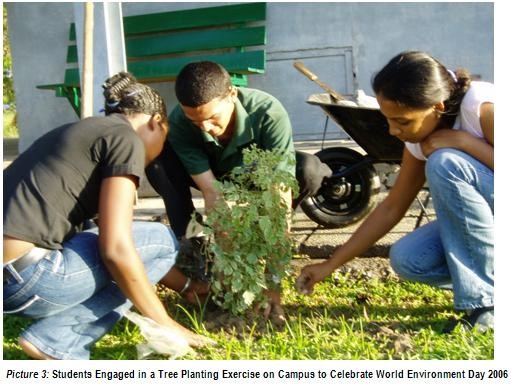 Faculty of Earth and Environmental Sciences